Why “Get Different” belongs on your bookshelf 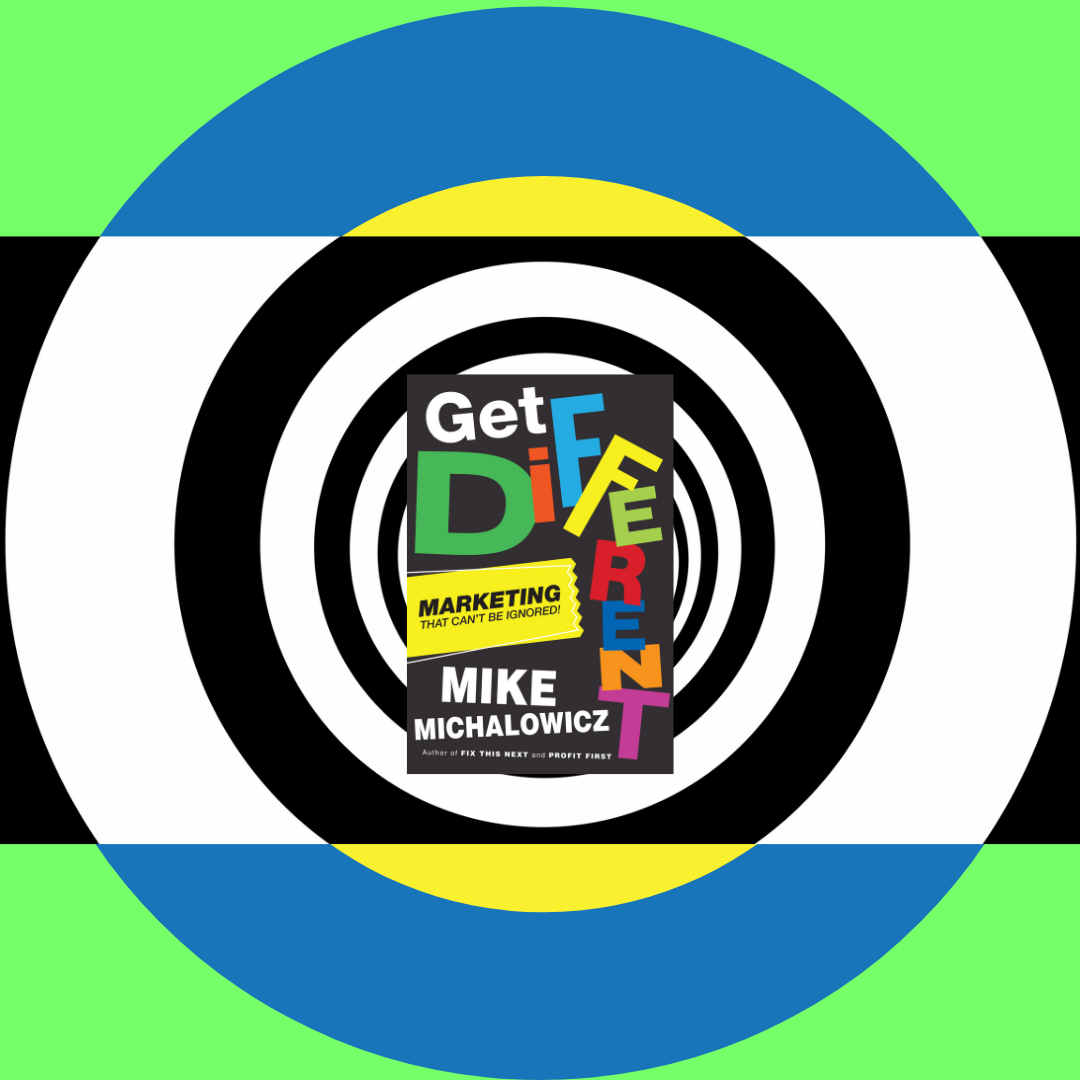 I recently joined the launch team for Mike Michalowicz’s new book, Get Different.

I had the honor of being one of Mike’s beta readers, so I read it a long time ago, and I knew I could confidently tell people they would benefit from reading the book.

I also have a long history of following and respecting Mike’s work in general. He’s an entrepreneur worth learning from.

Get Different launched yesterday, so today, I want to give you an overview of the book so you can honestly assess if it’s worth your money and time. I also want to give you a picture of who Mike is as a person. There are a lot of great entrepreneurs out there, and also a lot of shady ones, and I’d love for all of us to find the great ones.

What is Get Different?

Get Different kicks off with two main arguments:

“If your offer is better than the alternatives, in any single way, you shouldn’t try to market to your prospect, you must market to them. You have a responsibility to beat competitors…the unscrupulous companies, the companies who give less, and the companies who care less than you do about the people you serve. Otherwise, you are letting your customers get ripped off. You have a responsibility to treat your customers and prospects right by marketing the hell out of your company. If you have a better option for your clients and prospects, yet they don’t know it exists, they are forced to settle. That may be their problem, but it is your responsibility to fix it.”

“Imagine you are in a room with five hundred people wearing identical gray suits. One of these five hundred people is your soul mate. How easy is it to identify your perfect match in a sea of gray?…Now imagine there’s someone wearing a red suit. That person caught your attention – in a millisecond. So instead of going one by one interviewing the five hundred other folks for the next eight hours, it’s just easier to start with the red suit person – and heck, you may even convince yourself that they’re the one for you simply because they stood out to you right away. This example is for a soul mate. A friggin’ soul mate. And the idea of wading through a sea of gray suits for hours on end is still exhausting. So just imagine how little energy prospects will spend to seek you out in your gray suit of invisibility…Most businesses don’t wear red when the dress code is gray. Instead, they try to be a better gray option: a darker gray, or a lighter gray, or a grayer gray. Even if they actually are better, how would anyone know?…Better is not better. Different is better.”

Both of these quotes happen in chapter one. The rest of the book is a step-by-step process you can follow to find your own unique way to catch eyes in a sea of gray suits.

If you, like me, are burned out by free downloads and webinars and long-form Facebook posts and ads that all say more or less the same thing, but you don’t know how to do things differently, this book is a great tool for you.

In Get Different, Mike shows us how to start running experiments in our businesses – how to try new things, think outside the box, and have the courage to stand out. Part of the reason I believe in Mike’s argument is that he has been doing exactly this for many years…it’s how I found him in the first place.

Mike Michalowicz grew, ran, and sold several businesses before becoming an author. I first learned about him when someone told me I needed to track down a copy of Profit First, one of his earlier and most well-known books.

I bought a used paperback through an Amazon seller. A week later, a brand new hardcover copy of the book appeared on my doorstep with a typed note from Mike inside. He thanked me for buying from one of his favorite used booksellers and said he had selected my order for an upgrade. It was hand signed.

I examined the signature closely, not at all convinced that it was legit. (I asked him later and he said he sometimes drops by the bookseller’s shipping location to do exactly this…it was a real signature).

Profit First turned out to be a fantastic book. His style was quirky, and he got much more tangible and specific than I was used to in other business books.

I told my dad about my experience, and he subscribed to Mike’s email list.

He received an email from Mike with a 20-second video…Mike thanked him by name for subscribing.

I was a brand new baby entrepreneur on a hunt for people to follow. I decided that I would go on a mission to meet Mike someday.

I literally created a category in my to-do list called ‘Mission Mike.’

About a year later, my opportunity came. Mike sent out an email to his list opening up about 20 spots for people to gather in person to help him workshop his new book. I applied, didn’t hear back, then followed up just in case. Turns out, someone who had been selected just canceled, and I got their spot. I flew to New Jersey for a one-day workshop.

Mike turned out to be as genuine as I hoped in person. And he gathered some truly genuine and amazing people around him. I still have friends from that small group.

Ever since, I’ve stayed connected with Mike…

The book we workshopped in that small group became Fix This Next, and I’m now certified in that methodology. The first year had some glitches, and when I mentioned them, I found myself on a Zoom call with Mike having to explain my experience. Giving constructive feedback to your hero sucks, but he thanked me profusely. He even sent me coffee and a mug with a handwritten note.

Mike endorsed my book, Eureka Results, which was beyond thrilling.

Today, literally as I was writing this review, I got a voicemail from Mike thanking me for being part of the launch team.

Long story short, Mike does things differently. He’s a big name, but he finds ways to connect with individual humans in genuine ways. In all his books, he invites people to email him. He makes some of the weirdest marketing I have ever seen (like this video to announce the book launch). He uses words like friggin’ in his books. He wears vests all the time and pokes fun at the difficult spelling of his own last name.

I want my business to be memorable like that and serve people like that. That’s why I like this book. He’s definitely the guy to learn this stuff from.

You can get your own copy right here.

P.s. As a member of the launch team, I get some great perks if I meet my goal of selling 20 copies of the book between now and September 28th. If you’re thinking you might want to buy it, now is a great time. But even if you don’t buy it now, I hope you’re inspired to check out Mike’s work. You can also review Mike’s book website right here.